The University of New Mexico 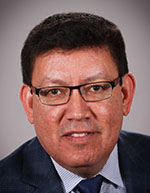 UNM Vice President for Research Gabriel P. López has been chosen to receive the 2016 STC.UNM Innovation Fellow Award in recognition of his achievements as one of the University of New Mexico’s leading innovators. This special award is presented each year by the STC.UNM (STC) Board of Directors to a university faculty inventor whose body of technologies have made a significant social and economic impact on society and the marketplace. The award will be presented to Dr. López at STC’s 2016 Innovation Awards Dinner on March 23, 2016. The annual event also recognizes UNM faculty, staff and students who have received issued patents and trademarks and registered copyrights within the past year. In addition to receiving the Innovation Fellow Award, Dr. López, who is also a professor in the Department of Chemical & Biological Engineering, will receive an Innovation Award for two issued patents this year.

Speaking on behalf of the entire STC.UNM Board of Directors, STC CEO Lisa Kuuttila stated:

“Dr. López is a truly gifted scientist and inventor who has made outstanding contributions to the field of biomedical engineering, a multidisciplinary area which pulls from the disciplines of medicine, biology, chemistry, tissue engineering and materials science to create new materials. These are generally materials developed for medical applications. His numerous technologies are being developed for such innovations as liquid biopsies, powerful parallel-flow cytometers for incredibly fast detection of pathogens and disease, and antimicrobial films and coatings for better ways to disinfect surgical instruments, medical devices and filtration systems. A great innovator innovates everywhere. This is particularly true of Dr. López who has developed innovative research programs for faculty and students. Nowhere is this more evident than in his work as the founding director of UNM’s Center for Biomedical Engineering (CBME). The STC Board of Directors is honored to recognize him as the 2016 Innovation Fellow.”

“Vice President Lopez has spent many years at UNM with a very research productive career that includes being the founding director of the Center for Biomedical Engineering. The work he and his collaborators have done is a prime example of the exciting outcomes from combining the School of Engineering’s work in micro/nano technology with cutting-edge research going on in UNM’s School of Medicine. It enabled a very effective collaboration among engineering and medicine. Throughout all of these activities, Vice President Lopez has made commercialization a strong priority.   He is the ideal leader to continue to build UNM’s innovation culture, and as such, a fantastic choice to receive this award.”

A native New Mexican, Dr. López received a B.S. in chemical engineering from the University of Colorado in 1985 and a Ph.D. in chemical engineering in 1991 from the University of Washington under the mentorship of Professor Buddy D. Ratner as a Kaiser Aluminum Company graduate fellow. From 1991-1993, he was an NIH and Ford Foundation postdoctoral fellow under the mentorship of Professor George M. Whitesides in the Department of Chemistry at Harvard University. He was appointed assistant professor of chemical engineering and chemistry at the University of New Mexico in 1993, promoted to associate professor in 1999, and promoted to the rank of professor in 2004.   In 2005, he became the founding director of UNM’s Center for Biomedical Engineering (currently a member) and the Biomedical Engineering Graduate Programs, and served for five years on the STC.UNM Board of Directors as the main campus faculty member.

In 2010, he was appointed a professor in the Department of Biomedical Engineering at Duke University’s Pratt School of Engineering while remaining as an adjunct professor in UNM’s Department of Chemical & Biological Engineering. At Duke, Dr. López was the founding director of the NSF’s Research Triangle Materials Research Science and Engineering Center (RT-MRSEC), which is focused on the programmable self-assembly of soft matter and currently includes approximately 60 researchers at Duke, North Carolina State, UNC-Chapel Hill and NC Central University.

In 2015, Dr. López was appointed as the University of New Mexico’s Vice President for Research where he is also a professor in the Department of Chemical & Biological Engineering and a member of the STC.UNM Board of Directors.

The University of New Mexico School of Engineering